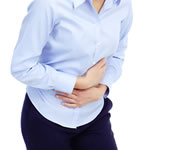 Women who are diagnosed with ovarian cancer report four types of symptoms most frequently:

If you have any of these symptoms, they are new for you and you have experienced them multiple times during a 4-week period, you should seek medical advice.