I still want to have sex but my body doesn't respond

In this article about female sexual dysfunction Maureen Matthews has spoken with:

"There is no one correct answer or approach to female sexual dysfunction and it is useful to consult with an expert in this area, who may be a sexual counsellor or a dedicated women's health practitioner. Further information can be found at  jeanhailes.org.au/health-a-z/sex-sexual-health or at the Australasian Menopause Society webpage, "Sexual difficulties in the Menopause".

"As we get older, both women and men need more or different stimulation (physical, mental and emotional) to achieve the same level of pleasure and arousal".

Allow more time for lovemaking. Spend more time on foreplay and flirting. Try not to be goal oriented. Rather, try to enjoy all of the sensual pleasures, moment by moment.

For a decade, respected author Maureen Matthews has written for Melbourne's Sunday Age. In her popular column, About Last Night, Maureen responds to a wide range of questions about sex and relationships.

Everything you need to know about menopause

Because it's whole lot more than hot flushes.

All three doctors said that women:

should consider Hormone Replacement Therapy to treat post-menopause symptoms, despite beliefs that HRT is linked to breast cancer, thanks to a 2002 study by the Women's Health Institute.

"Firstly, there is an incorrect perception for a woman at menopause, about what her risks and benefits are. Right at the top of women's minds is that their biggest is breast cancer, but that's not at all true. Their biggest risk is cardiovascular disease."

pointed to a recent study from Finland (https://www.ncbi.nlm.nih.gov/pubmed/26414962) - the result of which showed that women who stop HRT faced a higher cardiovascular mortality risk. Put simply, they run a higher risk of death from a cardiovascular disease.

Menopause is surrounded by unhealthy information

In this article in Sydney Morning Herald Jen Vuk discusses why so many women are dismissive of menopausal hormone therapy (MHT) [also known as hormone replacement therapy HRT].

The article briefly reviews the Women's Health Initiative (WHI) study initially released in 2002 which greatly impacted use of MHT.

The auther cites Professor R D Langer's article The evidence base for HRT: what can we believe?

that another problem with the 2002 report was that the results were said to apply to women of all ages, a finding rectified by a subsequent WHI 2007 report which acknowledged "that there was an age at which it's safe to start [HRT] and an age at which you probably should have second thoughts about starting".

This to me seemed the bigger scandal here. The fact that we weren't being given the proper information went beyond sheer negligence and moved into a far less grey area of potentially failing to save lives.

With the current consensus being that the earlier a menopausal woman starts on HRT the better, I know which road I'll be taking. Basically, like any working mother I've got enough worries to lose sleep over, but I'll not allow menopause to be one of them.

Everything you have ever wanted to know about menopause...

John and Garry talk to Professor Rod Baber, Professor of Obstetrics and Gynaecology and former President of the Australasian Menopause Society.

Over the past 14 years, the number of Australian women using hormone replacement therapy has plummeted amid fears of a heightened risk of breast cancer. Is HRT really a poison or is it a panacea for menopause? We investigate. 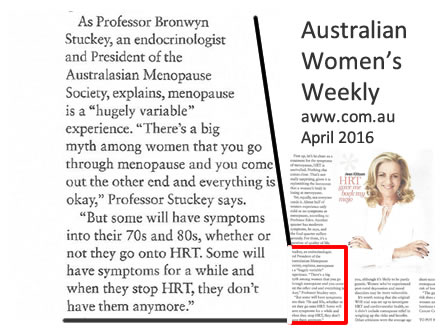 Menopause on the ABC HealthOnline

Menopause has had a resurgence of interest in the media lately with a series of articles posted on the ABC HealthOnline:

Dr Barry Wren, our founding AMS President was mentioned in the first article.  The AMS website was listed with links to our Information sheets, along with the Jean Hailes website.

A woman's rite in Active Retirees 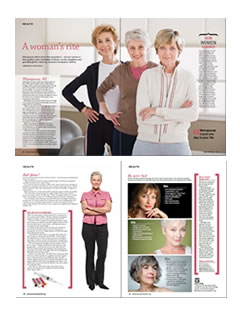 The June - July 2013 edition of the Probus magazine Active Retirees featured menopause as the health article.