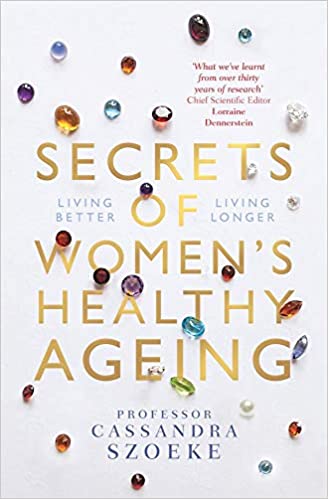 As the author states in the introduction, the book provides ways to maximise opportunity to optimise health and wellbeing in older age and the evidence or the “why” behind the recommendations. Her use of the term “burkini health”, to point out the book is looking at overall health and wellbeing, and not just “bikini health” or areas of the body covered by one, is apt. Additionally, the use of term “opportunity to optimise health”, alludes to chronic diseases of ageing being largely preventable.

The Marshmallow Test: Mastering Self Control 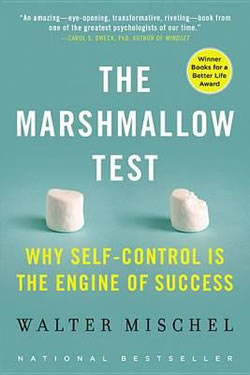 This is an interesting and informative book, not least by what it raises for clinicians engaged with patient’s emotional lability. I cannot comment on the psychological validity but will provide a summary of the message Walter Mischel imparts and why it was interesting.

Self–control or its opposite – temptation, may be anachronistic terms in the modern world. This book examines the psychological evidence for self–control and its advantages versus succumbing to temptation – the path of least resistance that is closely associated with cravings, frustration, failure, sabotage, jeopardy or addiction. Michel claims self– control can be learned – making will power less effortful and increasingly automatic and every day. It describes the experiments which have identified the skills that enable the individual to escape from stimulus control and achieve self– control, thereby providing real choice, instead of being pushed by the immediate impulses and pressures of the moment.

Mischel identifies the ‘hot’ system which gives us the emotions and zest that make life worth living and allows automatic judgements and decisions that work well some of the time. The ‘cool system’ gives humans the ability to behave intelligently, with imagination, empathy, foresight and wisdom. This book claims that the ability to think in constructive, alternative ways can change the impact of stimuli and life events on what we feel, think and do. This ability provides the potential for being purposeful agents of our actions, for taking charge, for exerting control and for influencing how life plays out. 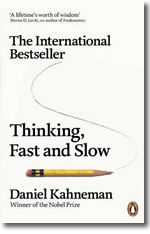 I have reviewed this book for AMS after mentioning some of its content to your editorial board. It was a summer read not for its ‘lightness’ but because the ‘non tired time’ enabled it to be read with diligence. Daniel Kahneman is one of the world’s leading psychologists and received the Nobel prize in Economics in 2002 – the only non-economist to have done so. He, along with his collaborator Amos Tverksy who died in 1996, spent a career looking at the thinking that goes into human behaviour. Therefore, it’s a satisfying read because it relates to ourselves, our relationships, our patients, our institutions and the wider global society. It’s appropriate to AMS because perhaps for medicine, anatomy is for the first age (structure) physiology the second age (function) and psychology integrating structure, function and thinking.

Now and Then - A Gynaecologist' Journey

Now & Then - A Gynaecologist’s Journey is the autobiography of Dr Margaret Smith, a Perth based Obstetrician and Gynaecologist. She is one of the foundation members of the Australasian Menopause Society, and was the President from 1995 to 1997.

Margaret is now in her late 70’s, and this book, published only last year, follows her life journey through her childhood, University years, early and late careers to now. She shares the experiences in her life that set her path, or were the turning points that got her through, not just in terms of shaping her career but also the making of herself as a person. She does this through story telling, giving opinions and analysis, and describing the people she met along the way.

She recounts many varied and interesting clinical scenarios - especially from her years in the Papua New Guinea Highlands where she had to deal with situations one could not dream of, including the delivery of premature, undiagnosed triplets, with no paediatric support! This and many other stories make light and entertaining reading. She also recounts stories of the non medical, and non clinical aspects of her life - her teaching, and her near death experiences in 2002 and her eventual recovery.

Experiments in Love and Death:Medicine, Postmodernism, Microethics and the Body

Reflective clinicians will enjoy this book. They are likely to learn much from its 274 pages when they read it for the first time and also when they return to it throughout their clinical careers. The work makes a significant impact because it reflects the author's honesty and humility and his uncommon and possibly even unique cluster of outstanding philosophical and clinical knowledge along with empathy, intellect and communication skills.