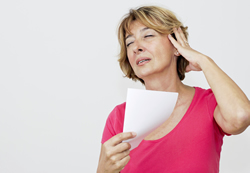 Sometimes a "natural part of life" needs a little bit of expert knowledge and understanding to better cope with changes. In the Washington Post article Treating menopausal symptoms: What you need to know by Janice Lynch Schuster on October 13 2014, she contrasts her activities surrounding understanding the onset of menstruation with her unpreparedness for the changes of menopause.

From Treating menopausal symptoms: What you need to know

...The more current analyses of the Women’s Health Initiative data, along with other recent studies, indicate that for women in their 50s, just entering menopause, HT is a relatively safe treatment that can be used for up to five years and is not associated with an increased risk of heart disease (although women should still be screened and treated for risk factors, such as high blood pressure and breast cancer)...

...Richard J. Santen, president of the Endocrine Society, says that following the 2002 findings from the Women’s Health Initiative, which indicated that hormone therapy was harming women, prescriptions for it fell by 80 percent worldwide. At the same time, he says, medical training programs began to overlook training new doctors how to care for menopausal women...

...“For someone who has been debilitated by symptoms, you need to find a doctor who will really talk to you and listen to your concerns. The doctor should assess your risk factors and understand the benefits and risks you face. Right now, people just don’t know enough about the data, and it is easier for doctors not to prescribe at all,” Chang says...

Find an AMS doctor near you